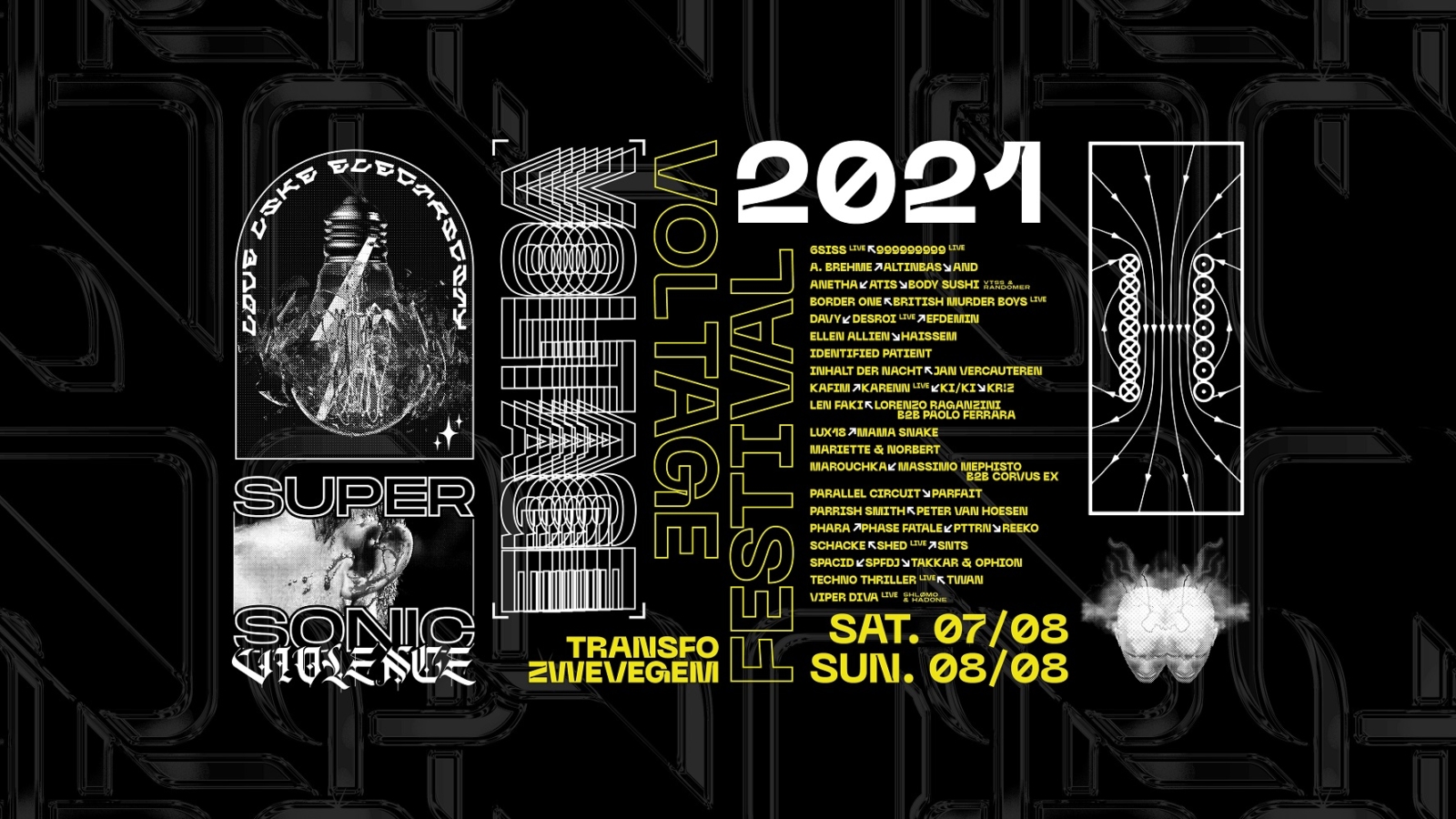 After the record edition of 2019, VOLTAGE is preparing to hit even harder in the new decade. The abandoned power plant, Transfo in Zwevegem (BE), welcomes a mix of the best national and international techno artists, on Saturday 7 and Sunday 8 August. The announcement of the complete line-up will make many techno-hearts skip a beat. With none other than Len Faki, Karenn, 999999999, British Murder Boys, SPFDJ and Anetha on the festival’s bill, the second weekend of August is one to look forward to!

VOLTAGE has grown into an impressive powerhouse on the national and international festival circuit. Last year, no less than 25% of the visitors came from abroad, namely from New Zealand, South Korea, USA, Australia, Austria, UK, France, The Netherlands and many more. Over the years, the organization has stuck to its core values: a mix of established techno heroes and emerging talents, presented in an industrial context: the amazing Transfo site in Zwevegem (Belgium).

A series of local, national and international artists will bring the old power plant back to life on Saturday 7 and Sunday 8 August. More than 50 artists complete the line-up, with Len Faki as the absolute headliner. The German DJ, producer, Berghain resident and label owner is seen as one of the greatest techno gurus on earth.

The line-up is further strengthened by the duo VTSS and Randomer, under the name of their musical project Body Sushi. The French DJ, producer and label owner, Anetha, will also be present. She is seen as the new generation’s leading figure and her musical DNA – a mix of EBM, trance, electro and old school ’90s techno – goes hand in hand with VOLTAGE’s concept. Viper Diva, the brand-new project of Taapion Records label owner Shlømo and his French countryman Hadone, will also head to the picturesque city of Zwevegem in August.

VOLTAGE always delivers a fine selection of live sets. This year it’s brought by Karenn, consisting of the renowned duo Blawan and Pariah. As well as the Italian duo 999999999, who already blew up the Turbine stage in 2018. The British Murder Boys, aka Regis and Surgeon, who have not performed in Belgium for 11 years (apart from their performance in C12). Last but definitely not least, four amazing live sets brought by: the Germans Desroi and Shed, the English duo AnD and the Belgians Techno Thriller.

VOLTAGE’s line-up is perfect for techno-adventurers looking for innovations in the scene. The bill includes the German SPFDJ, a resident at the revolutionary “Herrensauna”. She will bring a rough set which party goers can attend at their own risk. The Danish DJ and label owner, Identified Patient, who is praised for her unique sound consisting of fast, streamlined stompers with a hint of electro and wrong-speed EBM. Inhalt der Nacht, founder of the labels Modul & Lebendig, resident DJ at the famous Berlin club Griessmuehle and considered as one of the most promising artists of the moment, will be expected. To top things off VOLTAGE booked the Dutchman named Identified Patient. This frequently asked DJ at the avant-garde club “De School”, is widely praised for his signature sound, namely an experimental sound that floats between techno and acid.

The artists will be divided over three stages: the Anode, the Turbine and since 2018, the Rotor stage. Several organizations are given the opportunity to host their own stage and to let their DJ selection go wild on the VOLTAGE fans. There will be six hosts, including three returning ones: the French collective Possession and the Ghentian organization Rimbu. Brand new hosts are Kompass Klub which has already been elected best Belgian club for 2 years. Kompass is inviting the brand new STYXX (fka Stygian’s River), to join them in hosting the Anode stage on Saturday. But also Fuse, the longest running techno club in Belgium, C12 that finished second in the “Belgian club top 30” at the 2019 Red Bull Elektropedia awards and Voltage Imprint, the eponymous label with promising Belgian talents.

A covid Safe Ticket or European Digital COVID Certificate is granted when:
– You have been fully vaccinated for at least two weeks.
– You can present a negative and officially registered PCR test no older than 72 hours.
– You have had COVID in the past six months and can present proof.

For tickets and all info, head to the festival’s website:
https://www.voltagefestival.com/en/