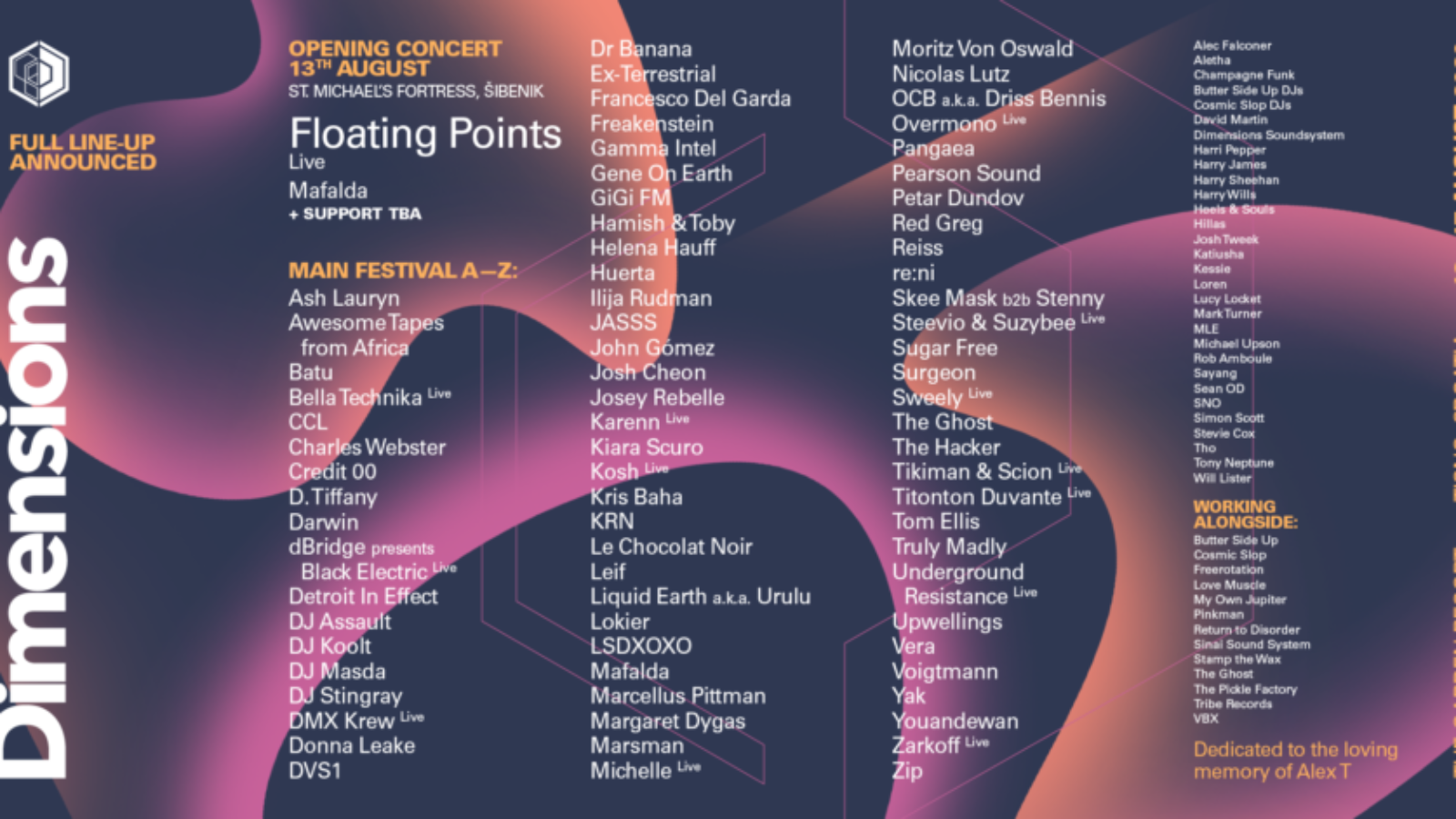 Dimensions Festival completes its ambitious 2020 programme with the news that Underground Resistance Live, Ash Lauryn, Moritz Von Oswald, Batu, DVS1, JASSS, Voigtmann, Reiss, Youandewan, Huerta, Red Greg, Yak, Freakenstein, Charles Webster, LSDXOXO, Josh Cheon as well as new partners VBX, Love Muscle and Stamp The Wax also get involved. For the first time this year, this all goes down at breathtaking natural bay The Garden Resort, Tisno from 13-17th August, 2020.
This new chapter for Dimensions Festival will showcase the same careful mix of cutting edge artists and much loved pioneers, with the famous attention to detail to production bringing each event alive. The setting is idyllic, with lush pine trees, a long sweeping beach, crystal clear seas and plenty of chances to get involved with parties on land and sea.
Before the main action, there is a special opening concert at St Michael’s Fortress, high on a hill in that will be headlined by Floating Points with his new live show, presenting the work of his latest album ‘Crush’ amongst other classics. Support comes from fellow Melodies International partner Mafalda with additional  live support still tba. Spaces are limited for the event with tickets available now via a number of retailers online.
After each day’s fun there, the renowned open air club Barbarella’s opens its doors, with the world famous Sinai Sound System powering the beats. We’re told the programme is soon to be revealed! There will also be plenty of brain nourishment with The Sound Studio, which will offer talks, technology and more to get you engaged with and educated on a range of vital topics.
Amongst the final additions are the iconic group, early techno pioneers and all round legends Underground Resistance who will play live. Then there is an Atlanta based DJ, journalist and member of the DJ Directory Ash Lauryn who has a timeless house sound, sci-fi soundsmith Freakenstein, the intergalactic booty hunter, plus legendary dub techno don Moritz von Oswald, bass and rhythm innovator Batu, American techno DVS1, as well as minimal house favourites Voigtmann, Reiss and Youandewan, The Ghost co-founder Josh Tweek as well as soul, funk, disco and house selector Red Greg.
As well as this international stars, vital party brands like Leeds’ Michael Upson and his pumping gay dance party Love Muscle, plus cult Dutch minimal crew VBX, who regularly  host ADE showcases with the likes of Ricardo Villalobos, plus online magazine Stamp the Wax, a treasure trove of musical discovery and crack team of DJs, all host their own events at Dimension this year.
These names all come on top of the first wave of names such as DJ Stingray, Zip, The Hacker, Tikiman & Scion performing Rhythm & Sound Live, dBridge, Mafalda, Helena Hauff, Pearson Sound, Skee Mask b2b Stenny, Surgeon, Marcellus Pittman, Truly Madly, Zip, Josey Rebelle, Gene on Earth, Francesco Del Garda, Detroit in Effect, Margaret Dygas, Darwin, re:ni, Awesome Tapes from Africa and many more.
This is shaping up to be a vital edition of Dimension Festival with a renewed focus with the same sense of purpose and dedication to the very best DJs, live acts and atmospheres in the world.

Dedicated to the loving memory of Alex T