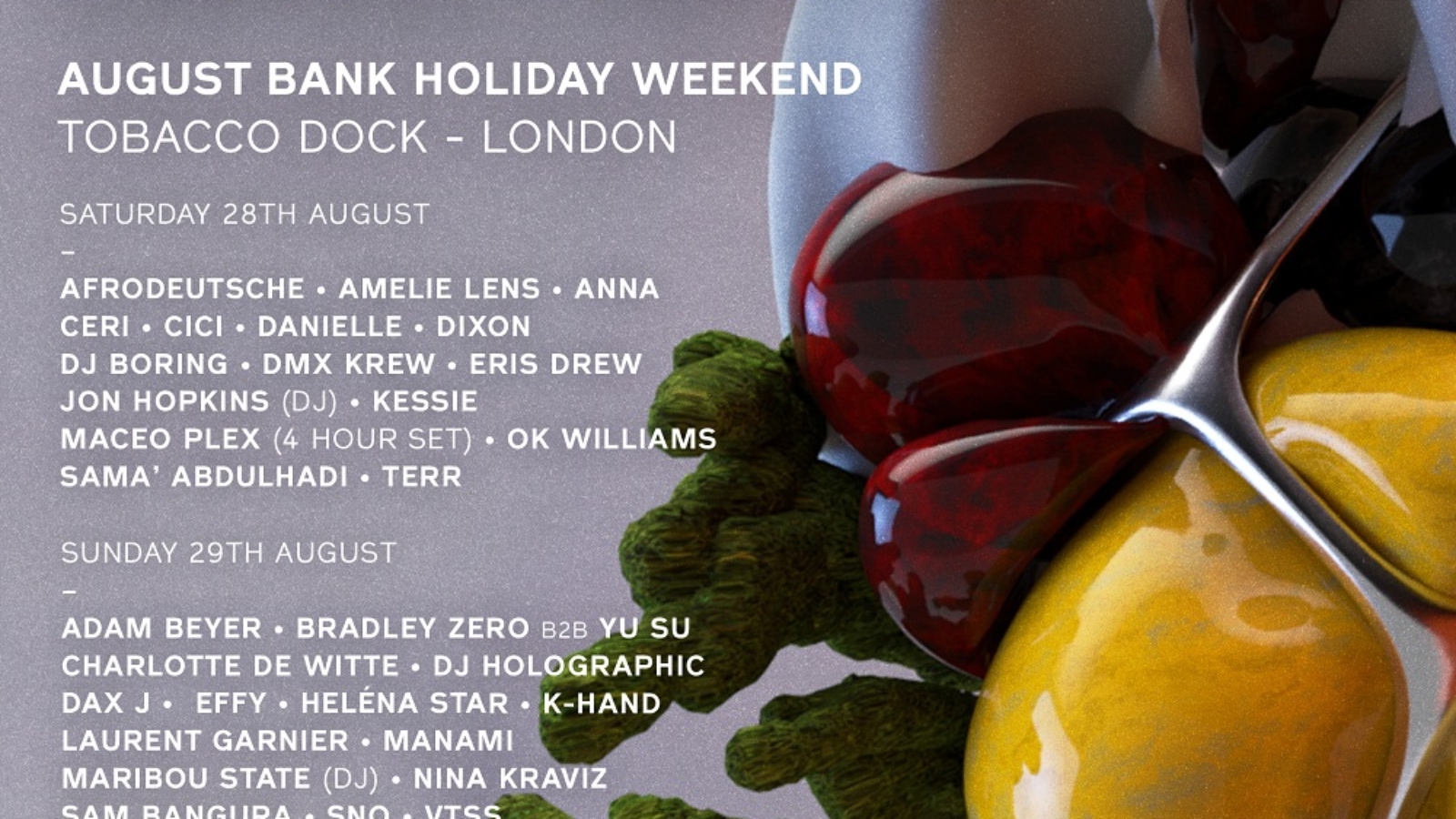 After the disappointment of postponing the festival for a second year, the anguish of lockdown, the trepidation of normality returning and the butterflies in the pit of your stomach as the first rave back approaches – all signs point to an historic summer ahead. Everything has been building towards J2 at Tobacco Dock. The light at the end of the tunnel inches closer. All that pent-up energy will be unleashed. Anticipate emotional scenes as London crowds return to their playground.

The formidable lineup combines Junction 2’s past and those booked for the 2022 edition, as well as names introduced during Junction 2’s virtual programme in addition to a scattering of new faces. The line-up represents the core sound of J2, orbiting around an identity of underground house and techno, underpinned by the most influential and exciting artists in the industry. With four arenas to fill across two days, expect to find quality in every room from The Great Gallery to the Car Park, The Terrace to The Little Gallery..

Saturday 28th August 2021 kicks off with multi-disciplinary artist and Aphex Twin protege, Afrodeutsche, who will be spreading her vast roots and influences across Tobacco Dock. Joining her is one of modern techno’s leading ladies, the highly-talented Amelie Lens and rising Drumcode Records artists, ANNA. A favourite from London’s notorious Sunday after hours scene, Ceri adds further dynamite whilst Cici, will be channelling positive energy from all corners of the universe. Rounding off the first swathe of female talent, Bristol-based Danielle will be showcasing her many tastes and styles.

Last time we caught him playing above Berlin at the city’s TV Tower for Connections, but now J2 favourite, Dixon is returning to Tobacco Dock for a set in front of a live crowd – always an unmissable event. Self-deprecating cult hero DJ Boring offers some contrasting light and shade against the rest of the line-up, while arguably the most experienced name on the bill is inimitable electro and breakbeat master DMX Krew. Flying in from the USA will be Chicago-native and High Priestess of Motherbeat, Eris Drew.

He’s set to play live at J2 festival next June, but this August bank holiday Jon Hopkins will take to the decks to spin his favourite records. Adding to the rising home-grown talent, Leed’s native Kessie will make his debut and following some epic past appearances, Maceo Plex is confirmed for an extended four-hour set, providing the opportunity to showcase his full range from deviant disco, to electro, deep house and darker techno. After impressing in her Junction 2 stream from Millennium Mills, NTS star OK Williams gets a well-earned booking on the big stage, whilst fearless Palestinian artist Sama’ Abdulhadi and Clash Lion front women Terr complete the line-up.

The programme on Sunday 29th August 2021 is no less drama-filled. Junction 2’s official ambassador, Adam Beyer takes top billing, having overseen J2’s growth from inner city festival to a global stage. Rhythm Section ringleader Bradley Zero will trade mixes with Yu Su in an eye-catching b2b, whilst Charlotte de Witte will bring heavy artillery and a need for speed, to be matched by Monnom Black architect Dax J. One-woman funk machine, DJ Holographic brings her impeccable selection skills to the programme. Two of Europe’s most hotly-tipped DJs are next up, with Effy and her larger than life collaborator Heléna Star both confirmed. From next-gen to veteran, well-travelled K-HAND will be showcasing the sounds of her Detroit hometown.

Fresh from being the subject matter of new rave documentary Off The Record, certified legend Laurent Garnier will be making up for lost time with a long overdue Junction 2 debut, as well as his first appearance at Tobacco Dock. Truly one for the history books. Classically trained pianist, turned DJ Manami will show why she’s assimilated so effortlessly to club culture, whilst Maribou State are set to thrill with the first DJ set in their hometown in nearly 2 years.

Having played previous J2 events at Tobacco Dock, as well as the festival itself, crowd pleaser Nina Kraviz is invited back as a guest of honour, adding her energy to the landmark show. Half Baked Records’ Sam Bangura is a familiar face on the London circuit, whilst South African native SNO will be blending music from across her home continent. Promising to go against the grain, Polish underground radical VTSS completes the programme for the unmissable, bank holiday blowout.

Legendary nightclub, fabric london, has been revealed as the afterparty location, with full details announced at a later date.

Final final tear of tickets for each day will be available at midday on Tuesday 18th May. To access tickets, please sign up at: https://junction2.london/inner-city