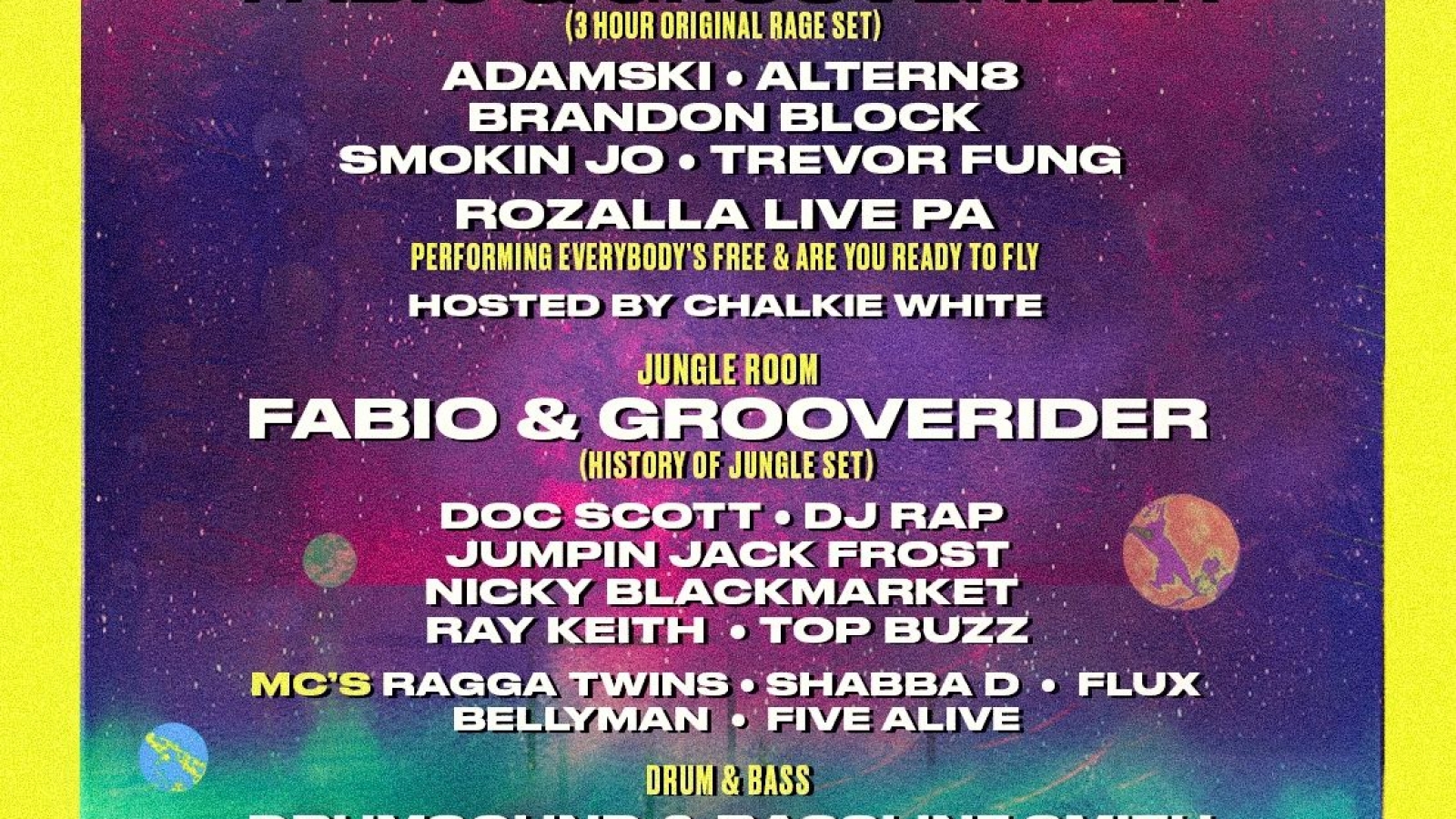 The last event was a roadblock sell out so get ya tickets fast!

RAGE was a weekly Thursday night party started in 1988 at the height of Acid House fever. RAGE was a different beast. While it certainly channeled some of that Acid energy, it pitted it against the new and exciting sounds emanating from Belgium, Amsterdam, Detroit, Sheffield, Essex and Hackney and in turn created a new style, a new sonic attitude and energy in the process. Rumbling bass-lines, narcotic synth rushes and roughly chopped and sped-up breakbeats all merged into a style that we now know as Jungle. Nothing like this had been heard before, this was a brand new style and it was coming out of London’s West End and Fabio & Grooverider were the people firmly behind it.

As Fabio & Grooverider explain “playing an irresistible brand of New York house, German Techno and UK Breakbeat we were breaking the rules by speeding up some records and chopping up breakbeats using just record decks and a mixer, inspiring producers to make tracks in a new futuristic style, this music would become known as Jungle. Coupled with a young, mixed crowd which consisted of gangsters, models, rude boys and Pop stars, London had never seen anything quite like RAGE, it was the entrance point to a brave new world, artists from Carl Cox to a young wide-eyed Goldie were part of an ecstatic audience. Heaven was the perfect place to hold such an event a big cavernous space with maze like tunnels, a lashing sound system and amazing visuals, this was indeed a labyrinth. RAGE ran for four years, in that time it changed the landscape of dance music. It was a daring glimpse into the future and still ranks as one of the highlights of our career. There will never be another night like RAGE, dance music has changed too much so for those who were there, they will never forget the rapturous energy. The birthplace of Jungle. For those who weren’t there, you missed something magical.”

Return to RAGE will see Fabio & Groove go in on all the RAGE classics in a very special 3 hour set , joined by original RAGE resident Trevor Fung plus house and rave legends Adamski, Alternat8, Brandon Block, Smokin Jo and a Live PA from powerhouse Rozalla performing her no.1 anthem everybodys free. Room 2 will see Fabio & Groove play a history of Jungle set alongside a carefully curated line-up of original Junglists as well as an upfront drum & bass room.

Return to RAGE will be a masterclass in the old-school. The roots. Expect no filler, only killer all night.

RAGE was an original brand of the pure organization.