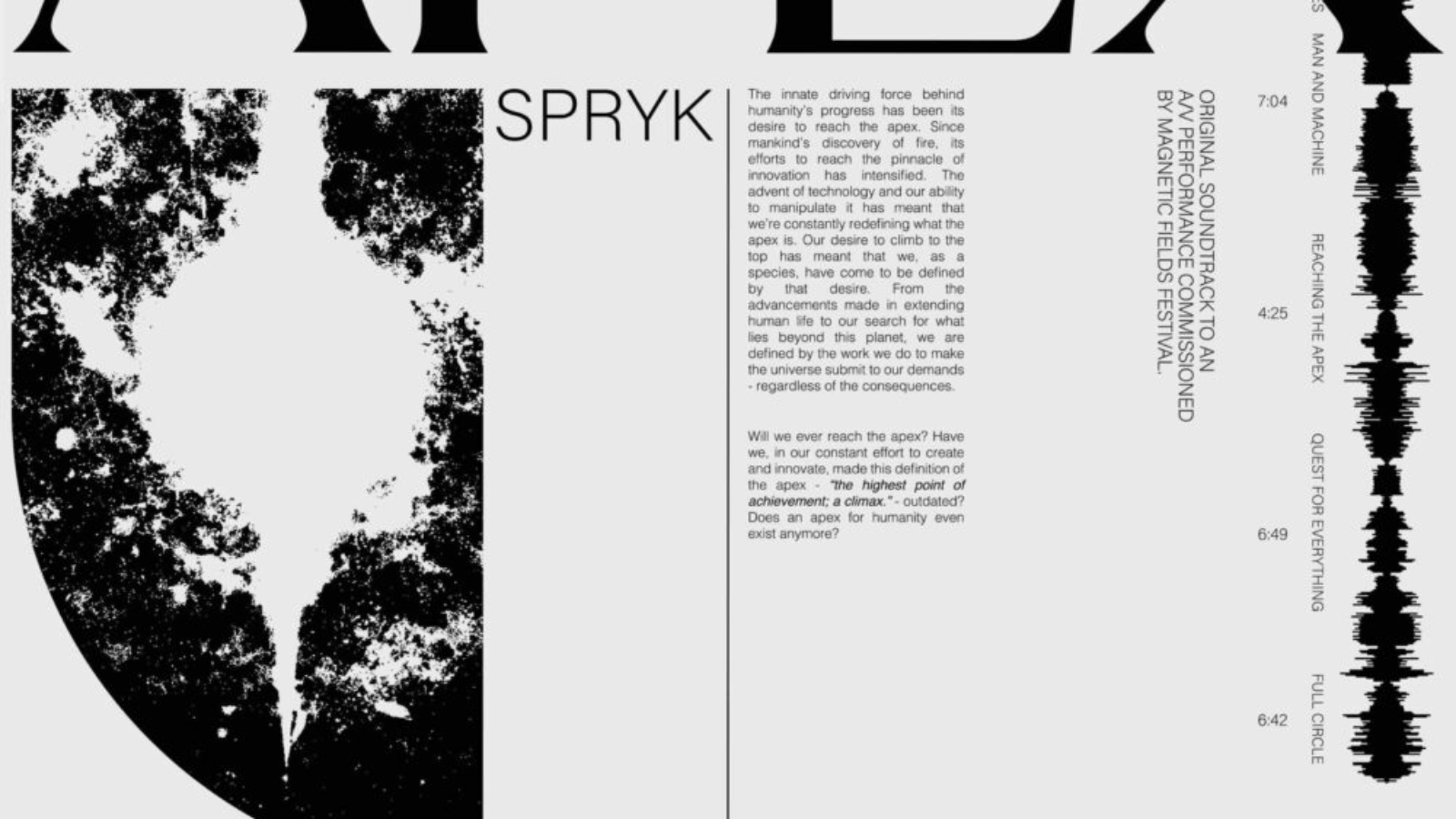 Mumbai based producer SPRYK is back on his Skip-A-Beat label with a seven-track album entitled ‘APEX’.

SPRYK is the electronic music & art exploration project of Mumbai based artist Tejas Nair. Whether its immersive art installations, awe-inspiring Audio Visual Live performances, ambisonic sound for VR & video games, or club-ready releases, SPRYK’s work is a classic case of electronic exploration that makes use of available technology while referencing that which came before it and does so in a sincerely human way.

‘APEX’, was originally an AV performance commissioned by Magnetic Fields Festival in 2019 and was rated as one of the top 5 key performances at the festival by Resident Advisor & Rolling Stone.   The project takes an in-depth look at the relationship between music and technology, has taken on a life of its own and resulted in the creation of a custom-built interactive video-game-like world that audiences can explore by registering for the launch event. The role-playing environment is made available to audiences through a browser-based immersive entertainment platform called ‘Vitamin-E’ (Co-Founded by SPRYK). The project has become a servant to the very questions it sought to answer, resulting in a visceral and cathartic release of the artist’s creativity.

At the core, Spryk as a project and Tejas as a musician, DJ, curator, and interdisciplinary artist focuses on provoking a greater understanding of thought, action & interaction. This idea is pushed to new depths on his forthcoming second studio album. The last year has seen his work endorsed and supported by the likes of Red Bull Music as a key artist in the region and Sennheiser Audio as a partner for their immersive audio line of products titled AMBEO. He has also worked with and been featured by the likes of Adidas Originals and PUMA on various campaigns.

‘APEX’ is due for release in the latter half of 2020 via his own imprint Skip-A-Beat, which was launched in late 2018 to release his debut album ‘Strange Movements’. The label found its roots in his online radio show that unearths the lesser-known plethora of electronic music talent across the Indian Sub-Continent.

The album kicks off with ‘New World’ which lays focus on dreamy soundscapes and enlightening ambience which gracefully continues through to ‘In Arrival’. Moving with capturing elegance ‘Species’ pulsates angelic melodies and resonating synths while ‘Man & Machine’ offers up punchy bass licks, an enticing vocal sample and percussion that rolls with vibrancy. Next up, ‘Reaching The Apex’ is a intricate, electronica cut with trappy rhythms and shimmering modulations until ‘Quest For Everything and ‘Full Circle’ round off proceedings with inviting sonics, uplifting oscillations and effervescent atmospheres destined for the festival stages and dancefloors.