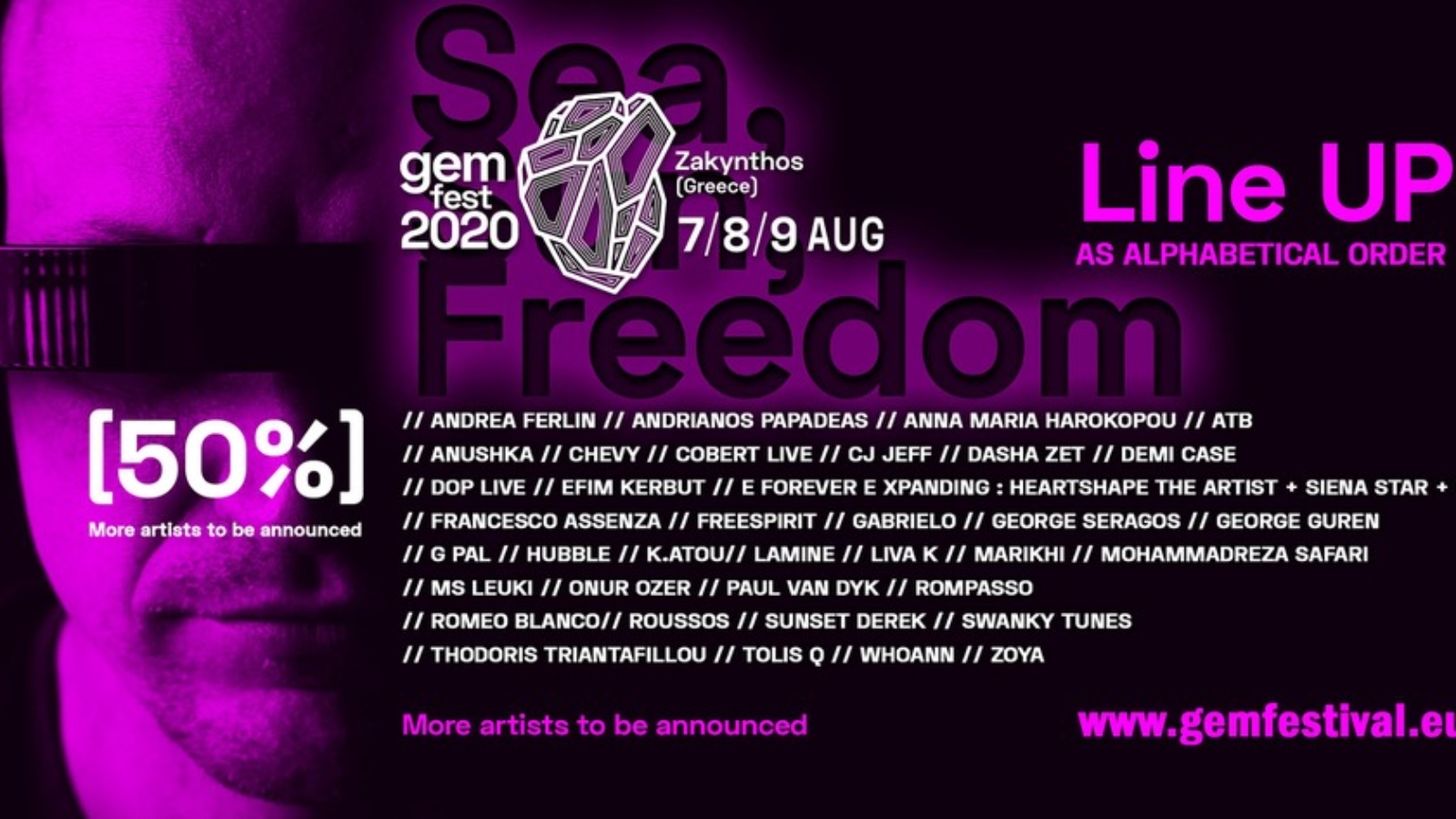 GEM Festival 2020 brings 3 Days and 3 Nights of nonstop music and entertainment, across 4 Stages. With the recent announcement that Greece will be opening up to travel and tourism in June, we are delighted to announce this year’s edition of the festival will be going ahead as planned.
Created in 2015 the Festival took place on the beautiful beach of Black Sea pearl, Anaklia. This year it returns, breaking from mainland Europe to rise again from the 7th to 9th of August in InIonian Sea, on the Greek island of Zakynthos.
GEM Festival brings together Artists, DJ’s and ravers in a breathtaking location. Drawing on acts from the full spectrum of electronic sounds this year’s edition can reveal the first wave of acts. Blending mainstage headliners like ATB, Paul Van Dyk and Swanky Tunes with the next generation of headliners Romeo Blanco, CJ JEFF, The YellowHeads. Alongside underground leaning acts such as Lamine, dOP (Live), Onur Ozer as well as respected local talent K.Atou, George Seragos and Mr. Roussos. With only 50% of the line up announced so far there’s plenty more to come, and with previous editions line ups anything to go by you can expect Big Room, Techno, House and Minimal artists to follow ensuring all tastes are covered.
Now in its 5th edition Gem Festival brings its considerable experience to the fore having previously hosted the likes of Armin Van Buuren, Luciano, Solomun, Paul Kalkbrenner, Axwell & Ingrosso, Fedde Le Grand, Steve Aoki, Boris Brejcha, Stephan Bodzin, Anja Snijder, David August, Mano Le Tough, Tales of Us, Dubfire + alongside many others, so you know there is a more still to be revealed…
With picturesque white sandy beaches, clear blue seas, you can get lost in your own adventure when taking a break from the festival. immerse yourself in the Mediterranean lifestyle indulging in fine food, wine. A short journey across the water takes you to the mystical island of Marathonisi, where Turtles hatch. The National Marine park allows you to explore enchanting protected wildlife. Inland you can hike in Askos Stone Park, a stunning expanse of nature and local wildlife. Or discover the local history in the surrounding towns and villages.
For accommodation options we offer our tent city which we call “harmony village” , besides that Zakynthos has plenty of options of accomodation, from hostel dorms to luxury villas and even luxury yachts floating next to the festival. During the three days and nights we provide free buses to the venue. Starting from the airport, ports and the different resorts along the coast line, ensuring you can travel safely to and from GEM. With regular international flights, 7 daily ferries from Athens and Greece open to travelers from the 15th of June, Zakynthos is easily accessible.
For those returning to us, the new festival location will retain the spirit and unique sense of togetherness that can only be found at GEM. And for  those joining us for the first time this edition of our festival is the most inspiring and exciting in memory, one which can never be forgotten.
Save the dates! Get ready to touch the GEM!
Line up in so far in A-Z order
Andrea Ferlin
Andrianos Papadeas
Anna Maria Harokopou
Anushka
ATB
Chevy
Cobert (Live)
CJ Jeff
Dasha Zet
Demi Case
dOP (Live)
Efim Kerbut
E Forever E Xpanding : Heartshap The Artist + Siena Star + Qado
Francesco Assenza
Freespirit
Gabrielo
George Seragos
George Guren
G Pal
Hubble
K.Atou
Lamine
Liva K
Marikhi
Mohammadrreza Safari
MS Leuki
Onur Ozer
Paul Van Dyke
Rompasso
Romeo Blanco
Roussos
Sunset Derek
Swankey Tunes
Thodoris Triantafillou
Tolis Q
Whoann
Zoya
For more information and tickets visit our website: www.gemfestival.eu
Or join the movement at GEM Festivals socials https://www.facebook.com/gemfestival/
Carrello