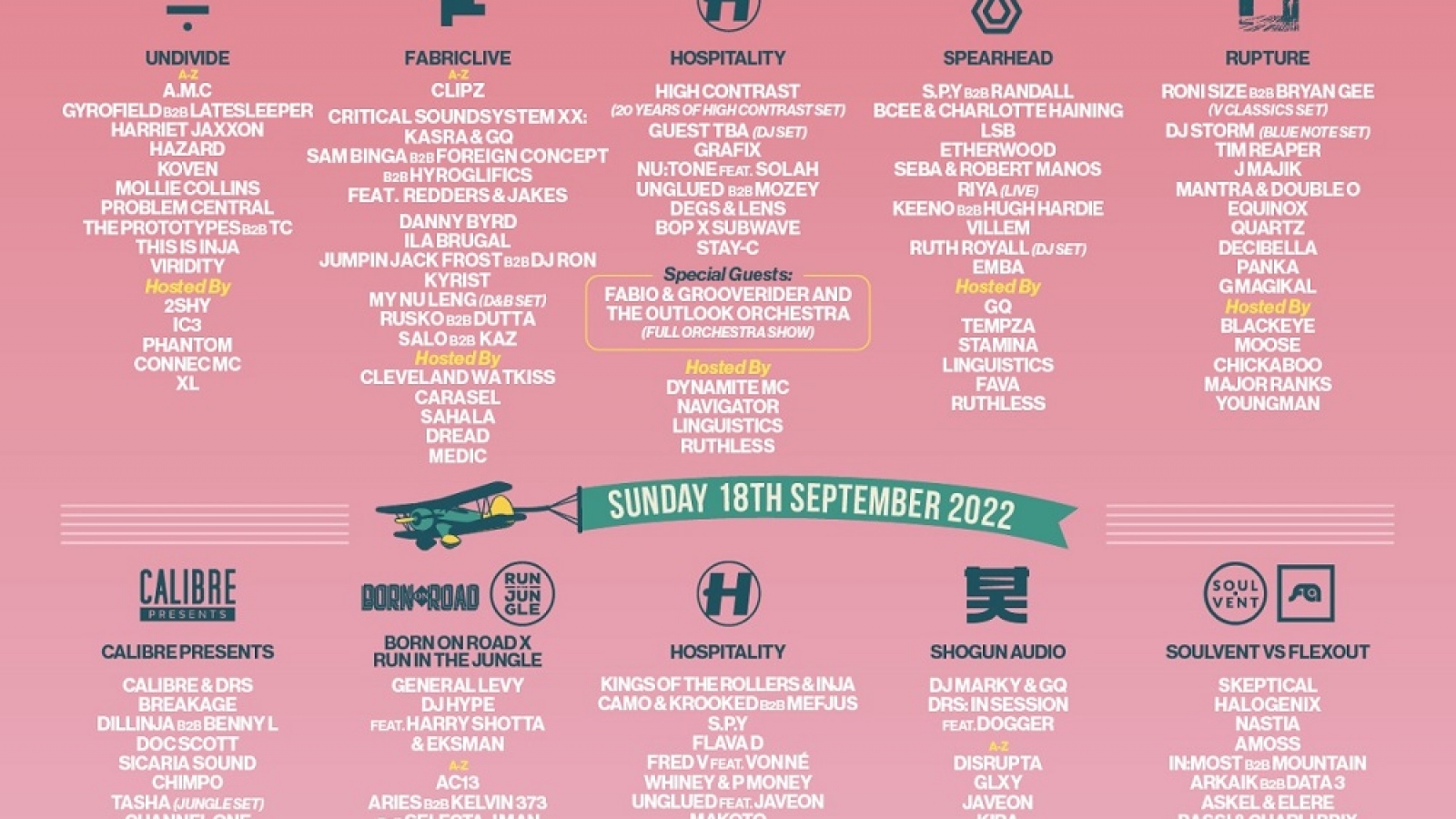 FABIO & GROOVERIDER AND THE OUTLOOK ORCHESTRA, HIGH CONTRAST, KINGS OF THE ROLLERS & INJA, CALIBRE, CAMO & KROOKED, DJ STORM, FLAVA D & MANY MORE WILL TAKE OVER BECKENHAM PLACE PARK IN SEPTEMBER FOR THEIR BIGGEST EVER LINE-UP

Fresh from winning Best Festival at the Drum & Bass Awards, the much anticipated Hospitality Weekend In The Woods today announces the full line-up for its biggest ever event. Headlining a total of seven stages across Saturday 17th and Sunday 18th September 2022 in Beckenham Place Park will be Fabio & Grooverider and The Outlook Orchestra performing their only London show of Summer 2022, High Contrast with a very special ‘20 Years of High Contrast’ set, Calibre, Camo & Krooked, DJ Hype, DJ Marky, Flava D, General Levy, Kings Of The Rollers & Inja amongst many many more, with stage hosts,FabricLive, Calibre Presents, Shogun, Born On Road X Run In The Jungle, Spearhead, Rupture, Undivide, Soulvent X Flexout and of course Hospitality all ensuring every point on the drum & bass spectrum will be represented in full. Tickets range from £30 to £60 + Booking Fee and are selling fast at ​​https:hwitw.ffm.to/tickets-jb

Located just a five minute walk from Beckenham Hill train and bus stations, Hospitality Weekend In The Woods is an easily accessible escape from everyday life. It plunges you deep into 98 acres of green and natural fields with lakes, woodland and the beautiful Palladian-style mansion all foreign an epic backdrop to two days of world class music.

Thousands of drum and bass fans attend this always sold out event and never fail to be in awe of the unique stage designs, the next level audio visual production, high spec sound and array of the tastiest street food South London has to offer. This year will be bigger than ever with wall-to-wall bangers, atmospheric woodland stages and never before seen back-to-backs.

Stage hosts include Fabric’s legendary Friday night London party Fabriclive as well as critically acclaimed drum & bass don Calibre and of course Hospitality themselves. But also joining are Undivide, who bring sounds from the heavier end of the spectrum, Spearhead – the UK D&B label founded in January 2005 by Steve Jeffery AKA BCee, and Rupture, which began as a club night in 2006 to showcase the jungle and breaks side of the spectrum. Known for pushing experimental, cutting edge production alongside classic jungle anthems, the party evolved into a label in 2012 and remains a vital underground voice.

Then comes Born on Road vs Run In the Jungle. Born on Road is a Bristol-based record label and DJ collective firmly rooted at the heart of drum and bass and jungle but with an eclectic sound. Friction’s Shogun Audio needs little introduction given that it is responsible for breaking many of today’s drum & bass stars and released some of the genre’s biggest anthems.

Last of all is Soulvent Records vs Flexout Audio. The former has always championed new talent and related music from across the whole spectrum and the latter is the London based imprint from drum and bass visionary Tom Bassi that has launched many careers while soundtracking global dance floors with its killer output.

In all there will be more than100 of the most acclaimed names for the drum & bass world playing across the seven stages over two days. As such, there will be something for everyone and a chance to curate your own unique weekend soundtrack. But some of the many standouts include an exclusive, one-off London show from Fabio & Grooverider and The Outlook Orchestra which will find the legendary DJs perform a set of stone cold drum & bass classics with the revered 40-piece orchestra.

Elsewhere, High Contrast will look back on a hugely successful 20 year career with a special anniversary set, Dillinja will put the sound system through its paces with his famously heavy low ends and DnB pioneer DJ Storm is also set to make a headline set like no other.

She will be joined by the master of smooth, deep liquid rhythms that is Calibre, the always energetic Camo & Krooked, some kinetic steps from the one and only DJ Hype and more golden rhythms from Brazilian hero DJ Marky. For some cross-sectional sounds including garage and grime look no further than Flava D, while My Nu Leng will be playing a special all D&B set.

As if that wasn’t enough, pioneers of the game like Roni Size, General Levy, Kings Of The Rollers & Inja play, and just about every other conceivable sub-genre will be served up by the 50 acts lined up.

After 18 years in the game, there is no other brand as deeply immersed in drum & bass as Hospitality. That means this annual weekender is unlike any other experience in the country.