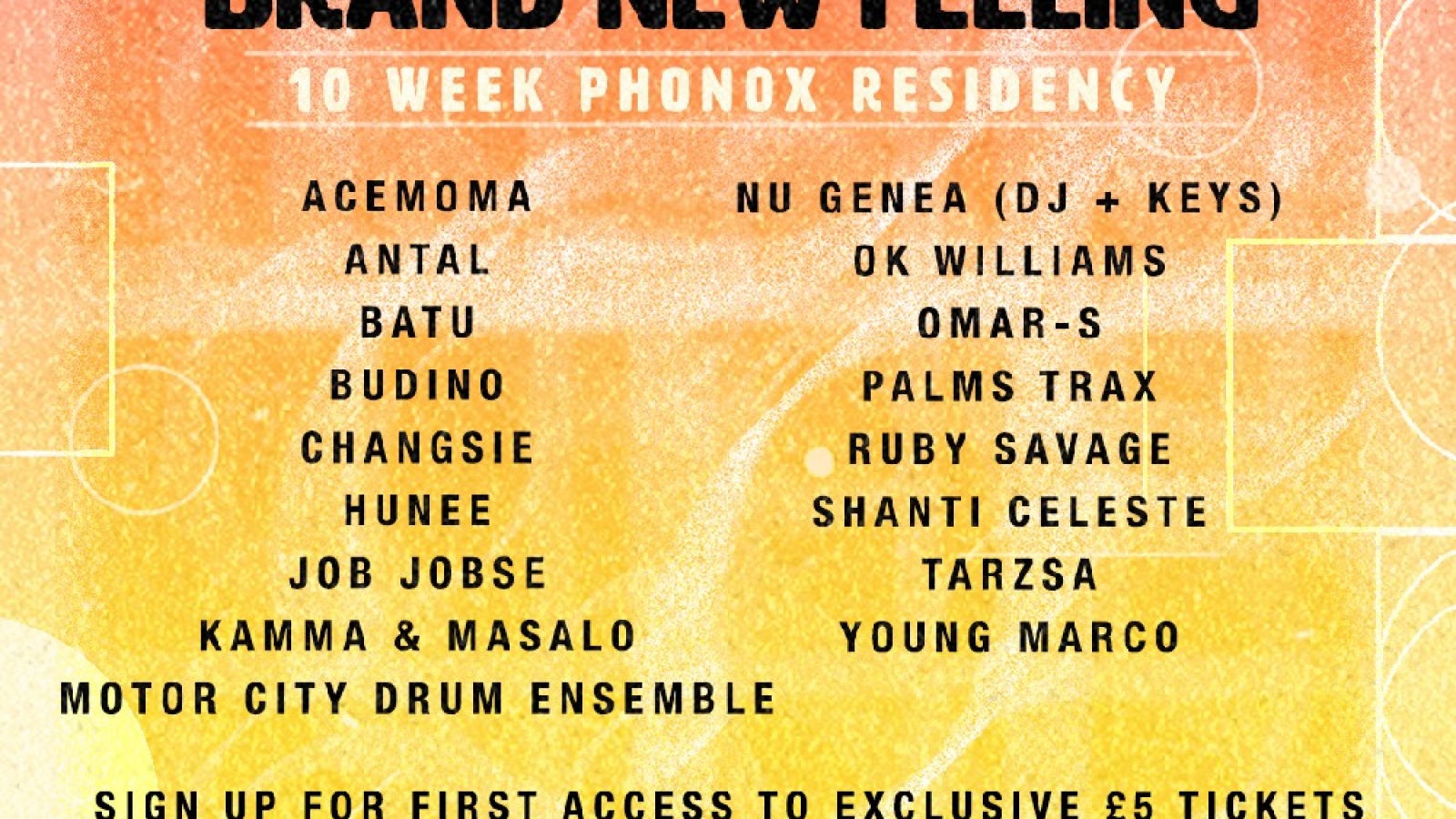 PLUS FREE TICKETS FOR NHS AND HOSPITALITY INDUSTRY WORKERS

Brixton electronic music institution, Phonox has unveiled Palms Trax’s ‘Brand New Feeling’ residency. Named after Roy Ayers’ track of the same name – a personal anthem for Pams Trax – the 10-week residency will run every Sunday from 26th September to 5th December. Each week Palms Trax will be joined by some of the industry’s most respected figures with the likes of Omar S, Shanti Celeste, Motor City Drum Ensemble, Changsie, OK Williams, Antal and Hunee all confirmed.

As clubs across the UK prepare to open their doors once again, Phonox are giving a little back with free tickets available for all NHS staff and carers. To support the thousands of people in our community that have faced financial difficulty over the past 18 months, free tickets are also on offer to hospitality industry workers as well as a generous allocation of reduced price £5 tickets available to everyone on a first come, first served basis.

Running from 4pm to 10pm on Sundays, Palms Trax residency at Phonox provides a rare opportunity to enjoy impeccable programming away from the chaos of peak-time clubbing. Sundays can bring a uniquely special atmosphere to the dancefloor, traditionally appealing to open-minded, genuine music fans with a vibe and energy that can otherwise be hard to achieve.

Palms Trax aka Jay Donaldson found early success when his 2013 ‘Equation EP’, released on the acclaimed Lobster Theremin imprint proved to be a dancefloor hit. The following decade has seen a string of critically acclaimed releases with Dutch power-house Dekmantel, a BBC Radio 1 Essential Mix and regular performances at revered institutions like Panorama Bar, Sonar, fabric and Glastonbury, not to mention his legendary headline sets closing out the main stage at Dekmantel 2019.

Across his 10-week residency, Jay will be joined by a carefully curated programme of artists with some of the scene’s most respected selectors including Shanti Celeste & OK Williams, Hunee, Antal, Omar-S, Motor City Drum Ensemble, Job Jobse, Young Marco, fellow Dekmantel affiliates, Kamma & Masalo, Discodromo resident Badino and queen of Tokyo’s underground scene, Changsie. Whilst each has carved-out their own distinctive identity, they share an ability to seamlessly weave between genres, from floor fillers to rare, hidden gems, few artists have such connection to the dancefloor, taking partygoers on a sonic journey filled with euphoric moments and plenty of surprises.

Commenting on the residency, Palms Trax said: “After 16 months spent pining for a sense of community, to have the opportunity to not only host a bunch of friends and peers on a weekly basis at Phonox, but also really familiarise myself with a more intimate crowd feels like a dream. Living in Berlin I’ve always loved going out on a Sunday, so I’m excited to experience that in London for the first time too! To be able to give a little something back to NHS, carers and hospitality workers that have been so greatly impacted over the past 16 months makes this all the more special.”

Tickets for Palms Trax ‘Brand New Feeling’ residency will be available for presale at 10:00 and general sale from 13:00 on Wednesday 21st July. To sign-up for presale tickets please visit: www.palmstrax.co.uk

NHS staff and carers can claim their free tickets at: http://ticketsforgood.org

Hospitality workers simply need to register with CODE – an online community for the hospitality industry: www.codehospitality.co.uk